Google Celebrates 80th Anniv. of ‘The Wizard of Oz’ With Ruby Slipper Surprise

Sunday marked the 80th anniversary of the release of “The Wizard of Oz,” and to celebrate the occasion, Google unveiled a special animated search results page complete with dream-sequence rotating screens, clicking ruby slippers and a flying farmhouse. 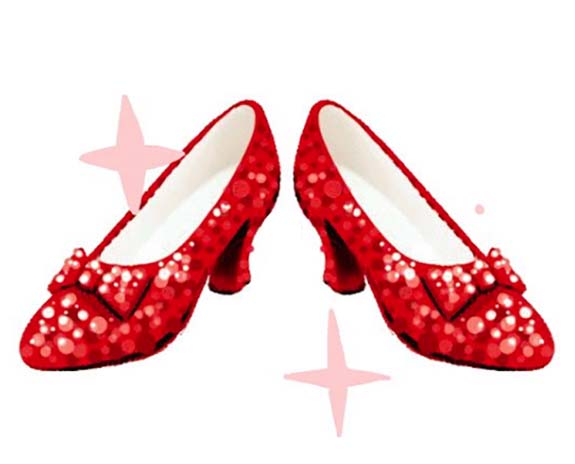 Those who Googled the term “The Wizard of Oz” saw a results page that, at first glance, looked pretty standard. It including the movie title, the year/category/runtime of the production, related images and an illustration of a pair of ruby slippers.

Google had tweeted on Friday, “We’re off to search the wizard, the wonderful ‘Wizard of Oz.'” That phrase, combined with the flashing pink starbursts above the ruby slippers on the search results page, hinted that Google had something special up its sleeve. 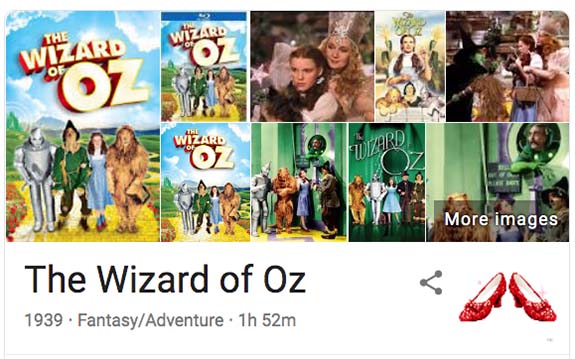 By touching the ruby slippers on the search results page, users were treated to an animation that began with the slippers clicking three times and an audio clip of Dorothy (played by Judy Garland) saying, “There’s no place like home.” (Fans of the movie will remember that Dorothy clicked her heels three times when she wished to return to Kansas during her fanciful visit to Oz.)

Google then programmed users’ screens to spin five rotations counter-clockwise as if a dream sequence was taking place. When the screen came to rest, all the text and graphics were in black and white.

In the 1939 film, the story begins in black and white and then transitions to brilliant Technicolor after Dorothy and her dog Toto are transported by a tornado to the magical Land of Oz. 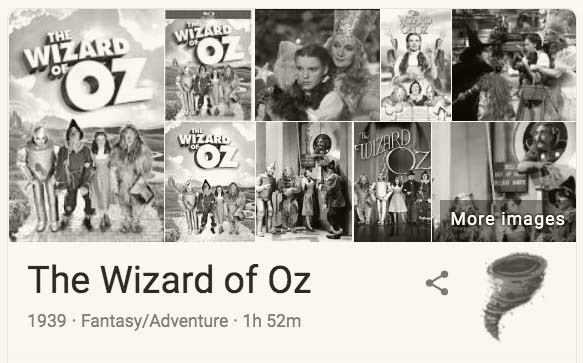 Google users then noticed that the position on the results page once occupied by the sparkling ruby red slippers was replaced with a spinning grey tornado.

When they touched the tornado, the animation started again, with Dorothy’s farmhouse emerging from the tornado and zooming out of frame. Garland was heard yelling, “Aunty Em!” as the screen rotated five times clockwise and returned to its normal color presentation. 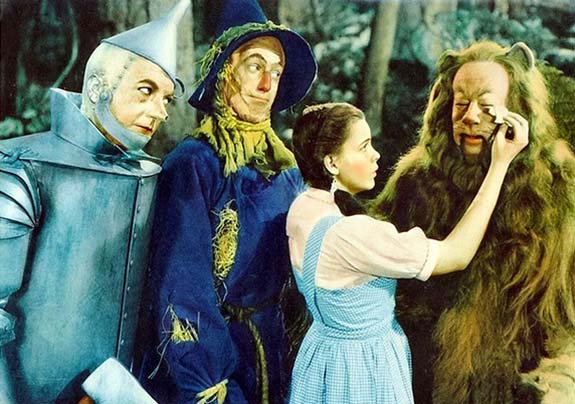 Google added this search page surprise to commemorate the 80th anniversary of the still-beloved movie classic, whose lovable characters, such as the Scarecrow (Ray Bolger), the Cowardly Lion (Bert Lahr) and the Tin Man (Jack Haley) won the hearts of viewers worldwide. Google did not announce how long the special search results page would remain active, but you can try it today.

Closer to home, regular readers of this blog know that the allure of the ruby slippers remains near and dear to us at Moses Jewelers. Several years ago, we custom-designed a pair that became the surprise of a lifetime for an unsuspecting customer as she celebrated a milestone birthday.

With an eye and ear for helping customers find that extraordinarily unique and personal surprise gift, our experienced sales associate remembered Mary was a huge lover of “The Wizard of Oz”. Mary’s husband confided he needed gift ideas, and he confirmed she indeed was “a fanatic for anything related to the story”. And so, the idea for the ruby shoes pendant was born!

With the help of a CAD (computer-aided design) drawing from our fine jewelry designer, it was easy for Mary’s husband to visualize the finished pendant, and we were able to give him an exact price to complete the project.

The rest is “history” — Mary could not have been more surprised or thrilled with her birthday gift.

On the day she stopped by to show off her new beloved pendant, she was sporting ruby slippers literally from head-to-toe!

A glimpse back at the history or these much-beloved shoes reveals the iconic slippers worn by Garland in the 1939 film returned to the Smithsonian in Washington, D.C., in October 2018 after an 18-month hiatus and rejuvenating facelift.

Since they were first exhibited in 1979, Dorothy’s Ruby Slippers had been a top attraction, but environmental factors, such as light and moisture, had taken their toll.

So, exactly two years ago, conservationists at the National Museum of American History launched a Kickstarter campaign to generate the funds to provide Dorothy’s Ruby Slippers with conservation treatment and a new display case. Within 30 days, the campaign exceeded its $300,000 goal with support from more than 6,000 donors.

The Ruby Slippers are now on view in a state-of-the-art display, along with a prop wand used by Billie Burke in her role as Glinda the Good Witch. The wand is on special loan to the museum through November 2019.

Despite their name, Dorothy’s Ruby Slippers are not adorned with rubies. In fact, the bugle beads that prop designers used to simulate rubies proved to be too heavy. The solution was to replace most of the bugle beads with sequins, 2,300 on each slipper. The butterfly-shaped bow on the front of each shoe features red bugle beads outlined in red glass rhinestones in silver settings.